"... feral bees are unproductive, swarmy and of bad disposition.

I've heard this often repeated - this or other disreputable things.  Feral bees probably were at one time but lately have not been, bred for disposition.  I've removed and caught many.  Same are mean.  Some are quite nice.  Some are nervous but not mean.  Some are calm.  These traits I have found easy to find in feral bees and easy to breed for.  Just keep the good ones and re-queen the bad ones.  From my experience they are often more productive because they are more attuned to your climate and build up at the appropriate time to make a good crop.  As far as "swarmy" I think all bees are swarmy.  This is how they reproduce.  I have not had any problems controlling swarming in any kind of bees."


If you look at feral (wild) bees with a permaculture attitude in mind, you will see colonies that survived on their own, no beekeeper to assist.  These surely are the strongest and most resilient ones - the ones best suited for your location, your flora and your climate.  These are the ones that the laws of nature found most suitable for the place.  They are unlikely to be a sickly ones - out in the big outdoors sickly creatures perish.  These would be the toughest and most resilient ones.  Swarms from such feral colonies should be considered a valuable resource.  They may turn out to be mean and nasty, but this is just the luck of the draw.  Still, they seem worth giving them a go - you never know, you collect a feral swarm and it may turn out to be a  "Black Caviar of bees".  Worth trying, IMO.

If you go to the Napoleon exhibition at the National Gallery of Victoria, you will quickly notice that there is a bee motif appearing all over the place.  If you wonder why, see below for my take on it.  If you find any inaccuracies, please advise, I am not an expert on Napoleon or 18th century naturalists.

The personal emblem of emperor Napoleon has only four elements, all clearly important:

Napoleon's coronation robe is covered in golden bees and even the spectacular vase, shown on each poster, is full of bees.Why all these bees?

Early naturalists noticed that among thousands of bees there is one to which all other bees show great respect and reverence.  Clearly, it has to be the King Bee, the beloved monarch of them all.  Many 17th and 18th century beekeeping books refer to a 'king bee' as being the most important component of a bee colony.  No wonder many royals took a bee as a symbol of themselves.

A bee was considered a symbol of immortality and resurrection.  Napoleon selected the bee to link the new dynasty to the very origins of France. Golden bees (in fact, cicadas) were discovered in 1653 in Tournai in the tomb of Childeric I, founder in 457 of the Merovingian dynasty and father of Clovis. They were considered as the oldest emblem of the sovereigns of France.  If you read carefully "The Da Vinci code", there is a reference to early French monarchic dynasty - Merovingians.

===========================================================
From “Bloodline of the Holy Grail” by Laurence Gardner:
The Merovingian kings were noted sorcerers in the manner of the Samaritan Magi, and they firmly believed in the hidden powers of the honeycomb. Because a honeycomb is naturally made up of hexagonal prisms, it was considered by philosophers to be the manifestation of divine harmony in nature. Its construction was associated with insight and wisdom – as detailed in Proverbs 24:13-14: “My son, eat thou honey, because it is good… So shall the knowledge of wisdom be unto thy soul…”

To the Merovingians, the bee was a most hallowed creature. A sacred emblem of Egytian royalty, it became a symbol of Wisdom. Some 300 small golden bees were founded stitched to the cloak of Childeric I (son of Meroveus) when his grave was unearthed in 1653. Napoleon had these attached to his own coronation robe in 1804. He claimed this right by virtue of his descent from James de Rohan-Stuardo, the natural son (legitimized in 1667) of Charles II Stuart of Britain by Marguerite, Duchesse de Rohan. The Stuarts in turn were entitled to this distinction because they, and their related Counts of Brittany, were descended from Clodion’s brother Fredemundus – thus (akin to the Merovingians) they were equally in descent from the Fisher Kings through Faramund. The Merovingian bee was adopted by the exiled Stuarts in Europe, and engraved bees are still to be seen on some Jacobite glassware.”
===========================================================

Early naturalists noticed that in the orderly society of a bee colony there is one, bigger than other and treated by all the bees with great respect and reverence - a King Bee. Napoleon took a bee as his personal symbol. I wonder whether he knew that it is actually a Queen Bee.

Go to this very interesting exhibition and look for bees.  You will have good reasons to laugh and something interesting to tell your friends and family.
.
Posted by AJ at 20:27 No comments:

The Warre hive has a multi-functional roof in three parts:
You might like to build a Warre style roof for your Langstroth? It provides what is arguably a better (closer to natural) environment for the bees inside the hive. The roofs we use here in Australia have fixed vents which provide a constant flow of air through the hive - something that does not occur in the bee's natural home - a hollow in a tree trunk.

This post describes how to easily make the top bar cloth in acordance with Warre's original plans (BfA p. 53). The whole thing takes about 15-20 minutes of work. David Heaf also has a post on this topic.

Note that there are alternatives to using hessian, such as organic cotton or even flyscreen. Here I'm trying to stay true to the Warre style. It's primarily about applying a flour paste to the hessian - if you do not apply flour paste, the bees are likely to chew through the cloth and cause problems when you remove the quilt at a later stage. 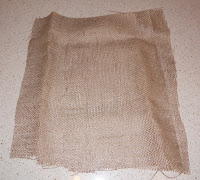 1. Roughly cut a piece of hessian to be a few cm larger than the outside dimension of your hive's box. Do not cut to fit the box at this stage - as the hessian dries, it make shrink and not fit, so best to make it oversized this stage. 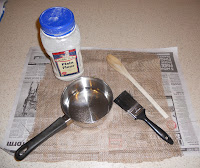 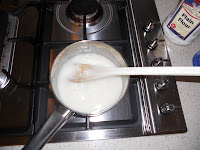 3. Mix a little flour with (perhaps three cups of) cold water and heat gently until it forms a paste. Warre's book states a certain amount of flour per litre, using rye flour if possible and adding some starch. No matter, so long as you have a thick but paintable paste. David's post includes some measures.

4. Place the cloth on a newspaper. Using a clean (new, cheapie) paint brush, apply the paste evenly over the cloth. Work it into the cloth. Don't apply too thick. You are aiming to soak the fibres without clogging all of the holes with the paste. The bees will decide whether they want to block those holes with propolis. 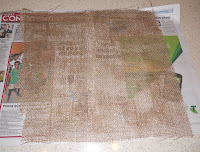 5. Once complete, the cloth will be wet and wrinkled. Leave it flat for a few hours to dry out. 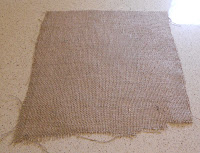 6. It will then by dry and wrinkled. Run a hot iron over it to flatten it out. If you don't, it won't sit neatly across the top bars (or frames) and form a simple seal. 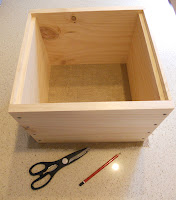 7. Place a hive box on top of the cloth and mark out around the outside. Cut the cloth to fit. It should be a neat fit and seal completely over the wood, to the edges, without (ideally) going beyond the edges. 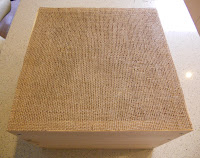 9. When the cloth has been in place on the hive for a few weeks, the bees will propolise it to the box edges and to the top bars, forming a bee-tight (and air tight) seal across the top of the hive. They can remove propolis (should they wish) to allow some air to vent into the quilt.
Posted by photohodge at 08:17 No comments: