No string in hives

Here's what string turns into when you use it inside a hive: 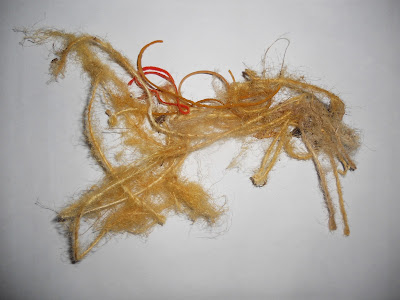 Needless to say, bees were getting legs caught up in it, so I had to open up the hive and cut it all out.

Why was it there in the first place? I transferred a swarm into my Kenyan TBH from a swarm collection box in which they'd ignored the foundationed frames and started building 'wild' comb on the box lid. I used the string and elastic bands to hold the comb on the top bars until the bees repaired the damage.

Once the bees settled and the comb was fixed (about 2 weeks later), fragments of elastic (see below pic) and string began appearing at the hive entrance. Elastic bands hung around with chew marks in them. Unfortunately they could not deal with the string as they chewed it everywhere and it became a mass of hairyness. I'll stick with rubber bands in future, unless there are better ideas out there??

The Kenyan's colony had a tough start in life but now doing OK. They are steadily (but comparatively slowly) building comb along the top bars - up to 11 bars now from a start of 4 cut combs.