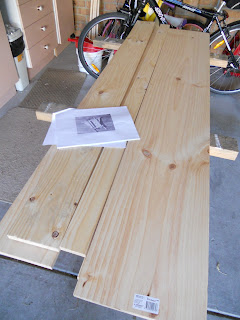 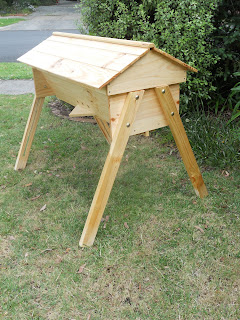 Otherwise known as a KTBH or hTBH (horizontal). Top bar hives are low tech, old style configurations of hives. As well as hTBH (such as the Kenyan and Tanzanian) there are also vTBH (vertical) such as the Warre.

The Kenyan was designed to be low tech, low cost and simple to build using available materials. The example pictured above (the one I built) was a luxury version with all new pine timber. Not very Permaculture, I'm afraid . . .

In the UK there are two well know proponents of TBHs - for Kenyans it's Phil Chandler and for Warre, it's David Heaf. They are also taking of elsewhere in the world. Here in Australia a few folks are serious about them and they are gaining popularity on a commercial and amateur basis. For example: Urban Hive | Malfroy's Gold | Healthy Organics.

Why go for TBH? Well there are various approaches to beekeeping using different configurations of hive 'hardware'. Commercial beekeepers tend to use standard hives, such as the Langstroth in Australia, Canada, USA and the National in the UK. These hives are frame based, meaning all of the comb can be removed for inspection and for other 'manipulations'. This has many advantages, including the ability to maximised honey yields. It's often said that a 'good beekeeper' (in Victoria) should get 100kg+ of honey per year from a well managed Langstroth.

Indeed, legislation in various places (including Australia) requires that all hives have comb which is 'on frames and easily removed for inspection' which generally means we are stuck with frames whether we like it or not. Unless the colony is a 'feral' (wild), in which case the government does not get a say in how the bees build their home . . .

TBH then is an alternative, considered perhaps 'less modern/scientific and lower yielding' by some and superior by others. 'Natural beekeepers' tend to favour TBH hives because they do not involve frames, this then allows the bees to build comb in (something more like) the way they do in the wild. This has all sorts of potential advantages which are far too detailed to go into in this post. Let's just say that one might believe that bees know better than humans how they'd like to construct their homes. Having said that, look at the homes we build in the suburbs these days and you might come to the conclusion that humans can't even build homes appropriate to our own needs, but I digress . . .

So, pure TBHs may not be legal if they do not have frames. In this case we must then add frames of some sort to our TBH designs in order to comply. This does compromise the TBH principle, but that's something we must accept as law abiding citizens.

Having decided on building a TBH, I had to choose Warre or Kenyan.

I wanted to work with as pure a TBH form as I could. The Kenyan TBH has sloping sides, which encourages the bees to make natural shaped combs which they then (purportedly) do not attach to the hive walls. In this case, you still have removable comb. I've since heard that the comb is often braced to the walls at the top end to provide strength and stability. Anyway, I thought I'd try to build one and see how it goes.

On the other hand, in an unmodified Warre, the bees build comb out to the walls which cannot be removed without cutting. Tim Malfroy has been making Warres with side bars and full frames for a while, as shown here.

One day I'll do a framed Warre too, it's just a bit more complicated/time consuming to build those internal parts accurately using basic home tools. Plans are available free on the internet for unframed and framed versions of Warres, but please note that Tim has modified the dimensions of his own design.

I'm not going to describe how to build a Kenyan - just provide a few pictures. Here are the plans, freely available:

Hi Tony, I am so glad you wrote about this. As soon as I heard about the KTBH I wanted one. My husband got involved and made it from Phil Chandler's plans. He loves woodwork. I was surprised at how quick and easy and cheap it was to build. I don't know how it will go but I'll keep you all posted via the blog.

Hey there - we've been getting around this problem of frames by having sides on the top bars in our warré hives. No diff for the bees to building to the walls if they choose (except the 'wall' is the side of the frame). This makes them removable as per aussie guidelines, and still allows the bees to make Natural comb. I think Tim Malfroy cam up with this idea. It's been wworking well in many of the warré hives we've seen. Photos here: http://milkwood.net/2011/09/26/warre-beehive-spring-inspection-at-belindas-urban-apiary/ and http://milkwood.net/2010/11/16/bringing-home-the-bees/ - best of luck with your adventures!

Many thanks Kirsten. I've updated the post to include your references. Indeed, it's my intention to build a side barred Warre at some point.

I read that Tim is building them in limited numbers and wonder what manfacturing process he uses to get a good quality 'frame' . . .

That legislation in Australia is the most ridiculous thing I have ever heard. I will not be complying with that.

Would like to know what legislation you are referring to as I can't find anything that actually stipulates that one must have frames in a hive in order to comply with anything.

I have a legal background and am naturally very curious about this so it's a genuine question.

Hi Hamish - belated response to your comments . . . The legislation is a modern response to a modern problem. If we changed the way we (commercially) approached beekeeping then the problem would largely go away by itself. However, commercial pressures (costs and profit margins) tend to drive the agenda. Within our Perm-api group we decided we'd advise members of their legal responsibilities. As individuals we must decide which way to go. :-) Regards, Tony.

Thanks for the question. This article is for Australia only, please bear in mind. Though there is also similar legislation in NZ and parts of US and possibly Canada. UK is different.

This is where I found information about the requirement for hives to have frames.

I understand frame bars require a spacing.
What is the spacing?
What is the mesh hole size and spacing? Where do you get it?
Would drilled holes be enough instead?