I suspect bees get more out of the placement of these boxes than possums ever do! I think I've seen at least six bee colonies in them in as many weeks. One problem is that they are sometimes hard to reach when you want to remove them. Another is that they have such a small volumes that the bees have to swarm regularly in spring/summer. 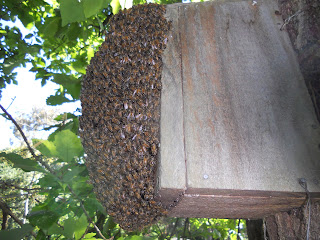 Here's an example from Balwyn. This looks like a swarm (a ball of migrating bees) but it's really a colony (established with its comb).

They were very placid (as is so often the case) and I approached within inches to take the shot - so close they were out of focus . . . Underneath the layers of bees seem in the pictures, they'd formed comb outside of the hole after filling the box. 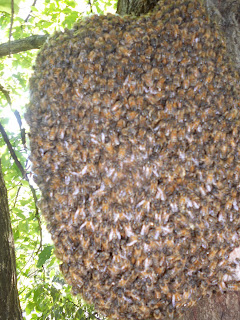 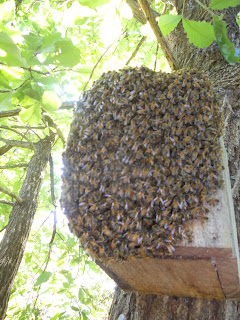 This box was since removed and the colony rehoused by an experienced beekeeper. Call the council or contact a local beekeepers/apiarists club if you have bee colonies or swarms on your property and want them removed. This can usually be done without killing them in many circumstances.