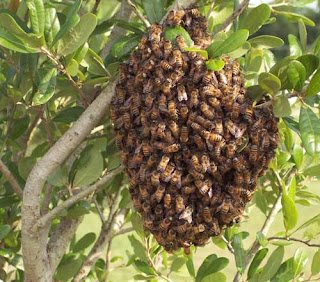 source: http://bbe-tech.com/bees/wp-content/uploads/2009/09/bee-swarm.jpg
The story of how a swarm required three attempts to settle into a new hive . . .

1. 11.30am.
I assisted Andrew to capture a small swarm which had exited a possum box at a house on Riversdale Road. I brought a brand new one box hive with 8 frames of full foundation. We generally tear some holes in the foundation as Andrew believes it will help the bees get a better feel for the space available within the hive. We didn't have time for such nicities as it was a busy day.

The swarm was neatly placed near the end of a pear tree branch. Andrew climbed onto next doors garage roof with the hive and held the stem with both hands, while I very gently cut through it. The bees were then shaken into the (strapped but empty) box and the top mat a lid placed on. The box was manhandled down to ground level and we placed it next to the house at the base of the tree, but right next to the french windows as there was a stone plinth available. We looked for a better location, since this was rather man made, but none was apparent/convenient. The bees started fanning the entrance and we bade our farewell 'till nightfall.

2. 2.30pm.
The householder called to tell us all of the bees were outside of the hive and formed a 'beard' hanging off the landing strip. I returned to the house to try again with another hive in hand. Figuring they might either dislike the inside of the box or the location, we decided I'd tear the holes in the foundation this time (see above). In fact I tore 3/4 of the foundation off the bottom of the middle three frames for good measure

Sure enough, the bees were outside but were clinging onto the stone plinth. No chance of shaking them off. I asked the owner for a small dust-pan . I very gently slid the pan under the feet of the swarm and separated them from the stone (I wish I'd taken my camera . . .) and scooped them up as a mass. They did not object and I poured them into the box. It took two full scoops to get them all.

The lid went on, the hive went back on the plinth, the bees started fanning and I departed hoping that I'd be back after dark to take the hive home.

3. 4pm
The householder called again. This time the swarm/colony had absconded and settled in a magnolia buch about 2.5m off the ground. Obviously it wasn't a foundation issue now, possibly the location of the box. We resolved to see what happened by the next morning and try again.

Next day 8am
Nice warm morning at 15 degrees C. Bees were quite inactive and still in the magnolia. Used the same hive we'd tried the day before (big holes in the foundation, but now empty of bees!). Usual story, dropped the bees into the box, probably 95% went in. Lid on and we placed the box about 1.5M off the ground behind the bush, next to a fence where it was sheltered and quite a natural setting. Some bees continued to settle in the magnolia, so I asked if we culd snip off the end of the branch and tie it to the front of the hive, which we did. This meant the fliers were attracted back to the box rather than to the bush. I figured we needed all the help we could get. No fanning at the entrance and a growing clump of bees hanging off the landing strip.

Left the garden and kept the fingers crossed. Owner called 30 minutes later: 'the bees are fanning at the entrance'.

It's now 4pm and the householder says the bees are happily buzzing in and out of the hive. Maybe the job is finally done.

Draw your own conclusions - but I resolve in future to:
Bear in mind - all of this work was conducted with full bee-suit protection . . .

Email ThisBlogThis!Share to TwitterShare to FacebookShare to Pinterest
Labels: Swarms